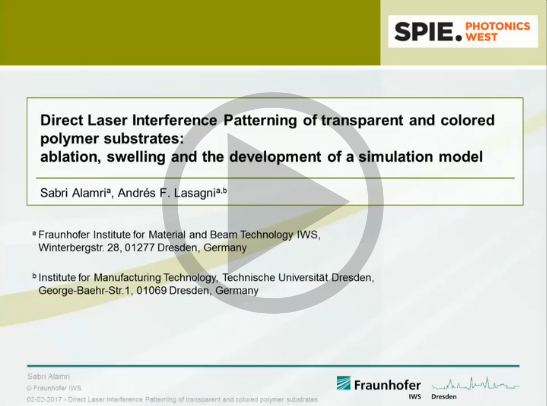 with results of the work in the Laser4Fun project, was presented by Sabri Alamri at the SPIE Photonics West conference in the USA. A video of the presentation is available at https://www.spiedigitallibrary.org/conference-proceedings-of-spie/10092/1/Direct-laser-interference-patterning-of-transparent-and-colored-polymer-substrates/10.1117/12.2251740.full?SSO=1

Femtosecond laser surface micro-texturing has emerged as a promising technology to enhance the tribological properties of different kinds of lectromechanical devices. In this research paper, we have exploited the intrinsic flexibility and micrometric accuracy of femtosecond laser ablation to realize complex micro-structural modifications on the surface of a laboratory prototype of a steel thrust bearing (un-tapered) pad. The Bruggeman Texture Hydrodynamics theory (BTH) is employed for the design of the anisotropic and non-uniform texture maximizing the thrust load of the pad prototype. The preliminary experimental results, reported in this work, show that the non-uniform micro-texture largely affects the friction characteristics of the contact. In particular, in agreement with the BTH predictions, the tribo-system shows friction properties that are strongly
sensitive to the direction of the sliding speed, as a consequence of the micro-fluid dynamics which are designed to occur only in a specific sliding direction. We suggest that the joint action of virtual prototyping (BTH lubrication theory) and ultrafast laser micro-prototyping can lead to unconventional and impressive results in terms of enhanced or tailored contact mechanics properties of the generic lubricated tribopair. 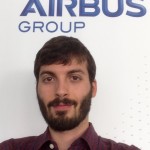 Vittorio Vercillo, an Early Stage Researcher (ESR) in the Laser4Fun project, was awared the Enzo Ferroni Award 2017 for his his contribution “Design rules for micro/nanostructuring of icephobic surfaces” of the European Colloid and Interface Society (ECIS) conference in Madrid. More info on: http://www.ecis-web.eu/ferroni2017.htm

We have studied the fabrication of line-like and pillar-like periodic microstructures on stainless steel by means of direct laser interference patterning. A picosecond (10 ps) pulsed Nd:YAG laser operating at 1064 nm wavelength was used to produce the microstructures with spatial periods ranging from 2.6 μm to 5.2 μm. By varying the laser parameters (laser fluence, pulse-to-pulse overlap) structure depths ranging from 500 nm to nearly 11.5 μm could be obtained. Furthermore, low and high frequency laser induced periodic surface structures (LIPSS) have been generated, resulting in three-level multi-scaled patterns. The orientation of the laser induced periodic structures with respect to the interference patterns could be adjusted by controlling the laser beam polarization. Finally, static water contact angle measurements are performed to investigate its correlation with the surface morphology. The treated surfaces are characterized using confocal and scanning electron microscopy.