On September 25th, Melissa Sikosana (ESR), has been awarded 3rd place by a distinguished jury, for “breaking the wall of bacteria related deaths”, at the “Falling Walls Lab Marie Sklodowska-Curie Actions Event“. This event was organised by the European Commission in collaboration with the European Parliament and supported by the Falling Walls Foundation.

The Falling Walls Lab challenging inter-disclipinary platform that invites talent academics, professionals and entrepreneurs from around the world to present breakthrough-research work, within 3 minutes, each to an audience of industry experts & decision makers. 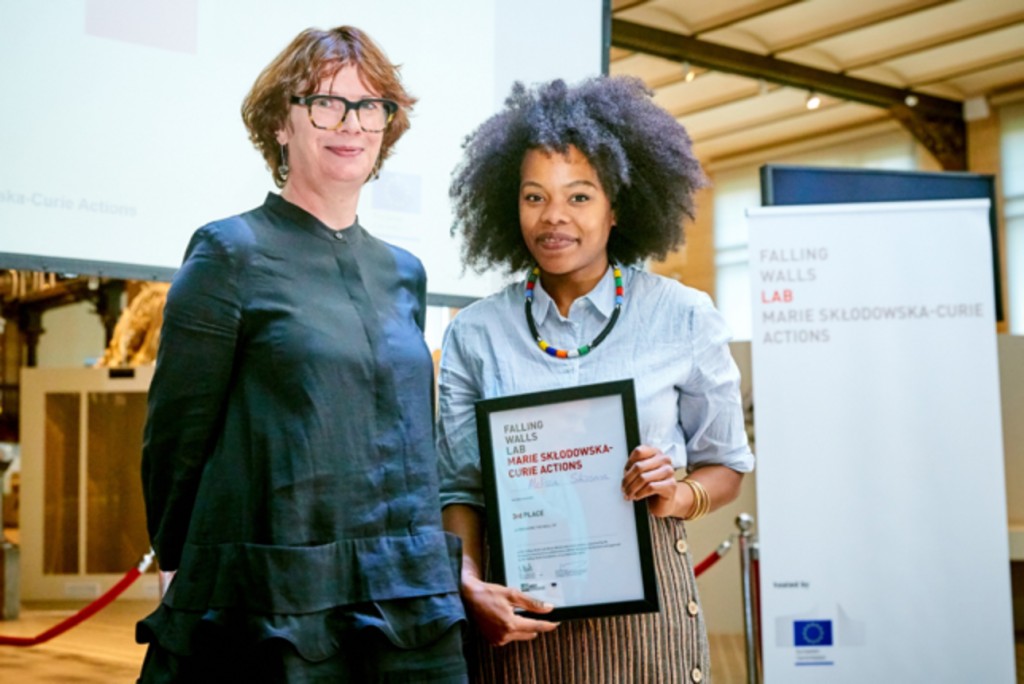 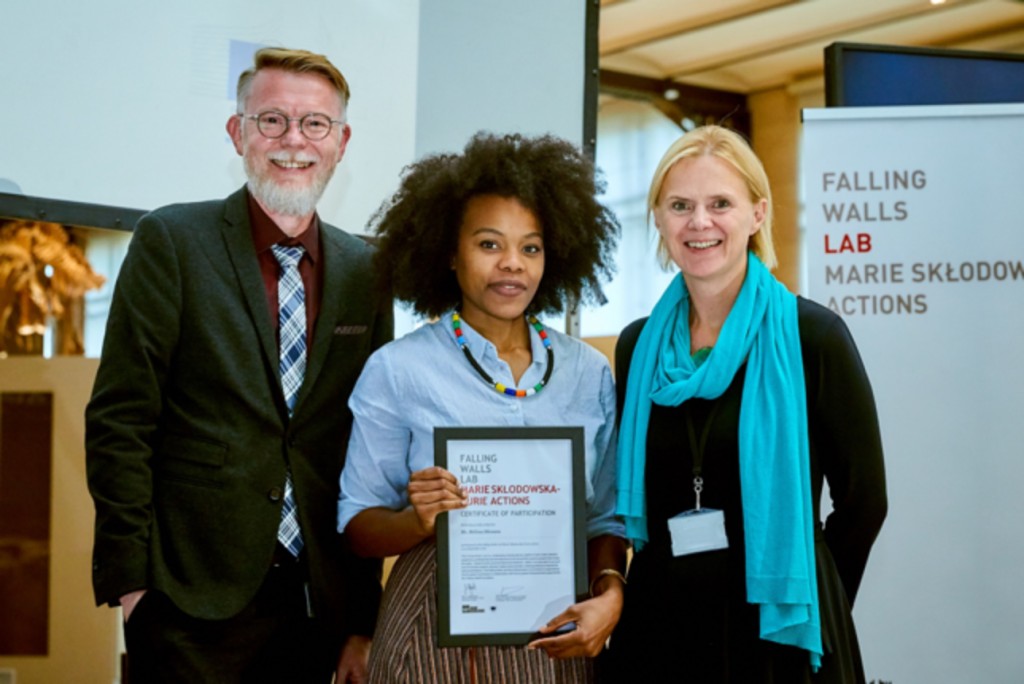 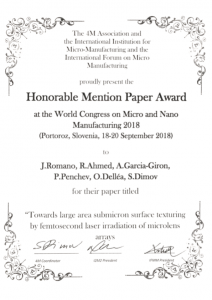 On the 20th September 2018, the World Congress on Micro and Nano Manufacturing took place in Portoroz, Slovenia. Jean-Michel Romano, an Early Stage Researcher (ESR) in the Laser4Fun project, was awarded of the Honorable Mention Paper Award for his contribution entitled “Towards large area submicron surface texturing by femtosecond laser irradiation of microparticle arrays”. 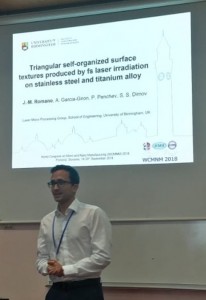 A delegation of the University of Birmingham participated in the 2nd World Congress on Micro and Nano Manufacturing (WCMNM 2018) that took place on September 18-20, 2018 in Portoroz, Slovenia. WCMNM 2018 is a joint conference of the 13th International Conference on MicroManufacturing (ICOMM), the Multi Material Micro Manufacture (4M), and the International Forum on Micro Manufacturing (IFMM). It was the opportunity for ESRs Antonio García Girón and Jean-Michel Romano to disseminate results of the Laser4Fun project to a large community of micromanufacturing experts, coming from Northamerica, Europe and Japan.

This work reports a laser patterning method for producing surfaces with dual scale topographies on ferritic stainless steel plates that are hardened by low temperature plasma surface alloying. Nitrogen and carbon based gasses were used in the alloying process to obtain surface layers with an increased hardness from 172 HV to 1001 HV and 305 HV, respectively. Then, a nanosecond infrared laser was used to pattern the plasma treated surfaces and thus to obtain super-hydrophobicity, by creating cell- or channel-like surface structures. The combined surface hardening and laser patterning approach allowed super-hydrophobic surfaces to be produced on both nitrided and carburised stainless steel plates with effective contact angles higher than 150°. The hardened layers on nitrided samples had cracks and was delaminated after the laser patterning while on plasma carburised samples remained intact.  The results showed that by applying the proposed combined approach it is possible to retain the higher hardness of the carburised stainless steel plates and at the same time to functionalise them to obtain super-hydrophobic properties.

The direct laser submicron texturing of X6Cr17 stainless steel plates is reported. A hexagonal close-packed monolayer of 1um transparent silica microspheres deposited onto the metallic surface was irradiated with near-infrared femtosecond laser source to generate an array of Photonic Jets (PJ). The PJ intensity profiles were calculated by simulation. PJ full width at half maximum was estimated to be ~500nm on the surface. The influence of pulse energy and focal offset on material removal and microspheres’ ejection was studied. Different 1um-periodic submicron topographies were fabricated by a single-shot irradiation, i.e. ranging from 30nm-height bumps to 200nm-to-1um diameter holes. Consecutive multi pulse processing generated triangular laser-induced surfaces structures (LIPSS). In addition, the dry laser cleaning effect and large area texturing employing PJ were investigated.

The large area uniformity of laser-induced periodic surface structures (LIPSS) on ferritic stainless steel and titanium alloy is studied. A single-step process was designed to generate low spatial frequency LIPSS (LSFL) over relatively large areas. For the first time, a new LIPSS morphology is fabricated using near-infrared ultrashort pulsed laser. Extraordinarily uniform self-organized triangular structures in hexagonal arrangements were fabricated in the subwavelength range. The generation of such LSFL was found to be highly repeatable, not material dependent but very sensitive to the used laser processing settings. Therefore, the sensitivity of triangular-LSFL formation to pulse fluence and scanning speed were investigated.

Last 11th of September 140 people, among students, supervisors and management, gathered in the ZAL (Zentrum für Angewandte Luftfahrtforschung) facilities in Hamburg for the 11th edition of the Airbus PhD Day 2018. Vittorio Vercillo, an Early Stage Researcher (ESR) in the Laser4Fun project, was awarded of the Best Speaker Award, Runner Up, for his contribution “Laser micro-/nano-structuring to produce icephobic surfaces”. In the picture, Vittorio receives the award from Dr. Michael Schoenwetter, Airbus R&T Partnerships & Contracting. 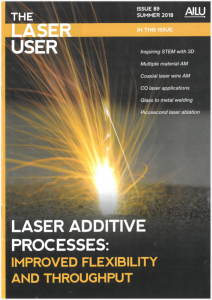 Some research performed within the Laser4Fun consortium was advertised in the The Laser User magazine (Issue 89 Summer 2018). The “Focus on Research” section highlighted the work of the University of Birmingham on DLW applied to anti-wetting and anti-icing properties, performed in collaboration with the Universidad Politécnica de Madrid and Airbus Group Innovation.

The Laser User magazine is edited quarterly by the Association of Lasers Users (AILU), the UK industrial/academic laser community.

To read the article: AILU Focus on Research