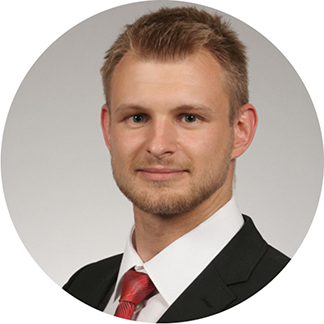 Marek Mezera an Early Stage Researcher (ESR), will defend his PhD-thesis on October 16th, starting at 16:30 o’clock in room 4 of the Waaier building of the University of Twente in The Netherlands. Supervised by prof.dr.ir. Gert-willem Römer and Dr.ir. Dave Matthews, he carried out most of his work at the Chair of Laser Processing at the University of Twente. Below is a summary of the work and results of Marek.

The interaction of an object with its surroundings depends firstly on the object’s surface, which determines its surface properties due to its chemical properties and macro- and microscopic structures on the surface. Earth’s flora and fauna offers a vast collection of different specialized surface properties due to (hierarchical) micro- and nanostructures. These natural examples serve as a catalog for scientists and product designers who aim for replicating those properties. A one-step method to produce highly regular (hierarchical) nanostructures is to create Laser-induced Periodic Surface Structures (LIPSS). Although extensively studied in the last half century, LIPSS manufacturing did not emerge from an experimental status into industrial applications due to scientific and technical challenges. In this thesis, a picosecond pulsed laser source is evaluated for the potential of processing a large portfolio of LIPSS on different types of materials. Therefore, six research topics are addressed. First, the feasibility of processing LIPSS on polymers using a picosecond pulsed laser source was studied. It was found, that LIPSS can be indeed be processed on two most prominent polymers (polycarbonate and polystyrene) using picosecond pulsed laser sources. The wavelength range, at which LIPSS production was possible was found to be wider than for nanosecond pulsed laser sources, but not as wide as for femtosecond pulsed laser sources. However, the range of peak fluence levels and number of pulses impinging one spot needed to produce LIPSS are found to be similar for all laser pulse durations. Second, the influence of the bulk temperature of a thermoplastic polymer (polycarbonate) on the formation of LIPSS using a picosecond pulsed laser source was investigated. It was found that the peak fluence levels at which LIPSS form decrease with increasing bulk temperature. However, the bulk temperature did not influence the number of pulses impinging one spot necessary for LIPSS development. From this, it can be concluded, that the development of so-called Low Spatial Frequency LIPSS of type II (LSFL-II) is an accumulative process, depending on the number of pulses and that LIPSS formation is strongly affected by the local sample temperatures reached and by the involved strong variations of the polymer viscosity. Third, the formation of LIPSS on a pre-structured polymer (polycarbonate) was examined in order to achieve hierarchical micro-/nano-surface structures. It was found that LIPSS can be formed on top of various forms and sizes of micrometer-sized Direct Laser Interference Patterning (DLIP) structures (ridges) by selecting the laser beam polarization perpendicular to the pre-structured microscopic ridges. Since LIPSS only form in a narrow window of laser fluence levels, the growth of LIPSS only on top of the pre-structured microscopic ridges was limited by the non-normal angle of incidence of the laser radiation at the side walls of the microscopic ridges. Fourth, the feasibility of producing all types of LIPSS known to form on metals due to femtosecond laser pulses, by using a picosecond laser source, with different types of laser polarizations on a medical-grade cobalt-chrome-molybdenum alloy was explored. It was found that indeed all of LIPSS types which form due to femtosecond laser pulses on metals can be produced using picosecond laser pulses. Fifth, a mathematical model was developed to predict the homogeneity of large areas | i.e. larger than the area of a laser spot | of LIPSS depending on laser processing parameters and material constants. The model was validated by experiments on silicon. This model can also be used to optimize laser processing parameters to decrease the production time for large areas of LIPSS. It was concluded, that the model is a convenient tool, which can be exploited for determining the process parameters necessary for the production of large homogeneous areas of LIPSS at the shortest possible production time. Last, it was shown that the LIPSS production time for Low Spatial Frequency LIPSS of type I (LSFL-I) can be further decreased by defocused laser processing. That is, it was shown experimentally that LIPSS produced on silicon do not differ in periodicity and height when processing in focus, or below or above the focus of the laser beam. Hence, to further increase production rates of LIPSS, defocused laser processing is a viable approach.